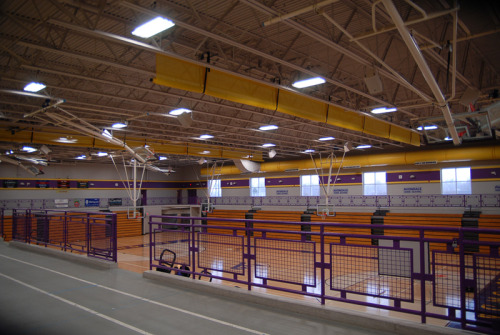 Recently Advanced Lighting & Sound was awarded the contract to upgrade performance systems in three different buildings for the Avondale School District.  The projects were designed by Tim Hamilton of Acoustics by Design.  Each project was unique as the district made improvements to the High School Gymnasium, Middle School Cafetorium and an Elementary School Cafetorium.

The High school Gym was in need of an upgraded audio system.  The current system dated back to the original construction and over the years failures in speaker components and electronics had rendered almost half of it inoperable.  Additionally the original system lacked the processing and control to make the solution multi-functional.  The intent for the new system was to increase performance, add functionality to accommodate a variety of events and provide dependability moving forward.

The existing system was de-installed and new JBL AC 2215/64 speakers were installed.  These speakers have a very defined pattern that worked well in the configuration of the room.  For Low frequency augmentation a pair of EAW VRS18 subwoofers were added.  Power for the system was provided by an assortment of Ashly Audio KLR4000 and KLR3200 amplifiers.  All of the system processing was performed by an Ashly ne24.24M processor configured with 4 inputs and 12 outputs.  The Ashly software is clear and easy to use in adjusting the performance of the system.  The WR-5 remote allows for a simple way to recall system presets.  New wireless by Audio Technica and playback devices by Tascam completed the project.  The biggest challenge for the Install team of Advanced required the hauling of materials and Scaffold down the bleachers form the elevated track since no ground entry point was available.

The Middle School project was more involved and required a replacement of the lighting dimming and control system, the main PA speakers and mixer as well as installing a new fixed video projector and motorized screen.

Over the years Advanced has serviced the failing dimming system by applying band aid after band aid to it.  It was nice to see it finally replaced with a dependable solution.  A new diming system by ETC was chosen along with an ETC SmartFade control console.  Both items provided the necessary long term performance and dependability the district was looking for.  Some new Source 4 ellipsoidal’s  were added  for improved light output and the system was complete.

The Audio system was a little more challenging requiring new conduit being run around the room for interconnection.  The existing speaker system was an outdated exploded central cluster that was primarily designed to accommodate speech.  The new system was designed as a Left and Right Cluster consisting of a Renkus-Heinz STX4/94 and a Danley Sound Labs THMINI per side.  This selection provided for focused coverage and an extended frequency range over the original solution.  Again an assortment of Ashly KLR4000 and KLR3200 amps were chosen.  Processing was performed by and Ashly 4.8SP unit.

The audio mixer was a big part of the solution for the fact it needed to be easily operated by both skilled and unskilled individuals.  For this reason a Soundcraft Si Compact was installed.  As a digital console it provided the depth of features that would be used on various programs and left a simple recallable solution for the less skilled.  New Audio Technica wireless and an updated Clearcom system were also part of the project.

The video system upgrade was added to meet the growing presentation needs of the room.  More and more meetings and events needed a way to easily project content in the room.  The video system was based around an easy to use Extron  System 5 IP.  This solution provided the necessary switching and scaling of the video system.  A variety of Extron CAT5 extenders were used to interconnect VGA input sources and the projector.  The Projector chosen was a Panasonic PT-DW6300US.  At 5500 lumens it was more than bright enough to be used with the facilities lighting conditions.  A Da-lite motorized rear projection screen was used on stage for added flexibility.

The Elementary School system was designed to provide a fixed performance solution to the cafetorium.  Typically a portable solution was setup and taken down whenever an activity was planned.  This added time and the possibility of error for every planned event.  The solution was to provide a permanently installed system based around the JBL CBT series of speakers.  A CBT 70 J and E were installed per side providing extended low frequency pattern control to the line array solution.  Amplifiers by Ashly were used along with an Ashly 4.8SP for processing. A Yamaha rackmount mixer was installed in the main rack and a portable rack with a Shure SCM268 was provided to be used in the Gym area or as additional inputs to the stage.  New Audio Technica Wireless and a Tascam CD player completed the system.

If you have similar systems in need of an upgrade contact Advanced lighting and Sound for a free site visit to see how we can help you improve performance and efficiency.