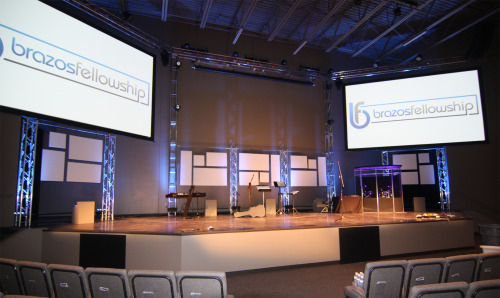 Brazos Fellowship Church is located in College Station Texas. It is a young church that has experienced significant growth over the last few years running four services a Sunday. They had out grown the space provided by the converted movie theater and it was time to add on a new worship space that would allow them to re-purpose space for the youth program and give them the necessary space for continued growth. 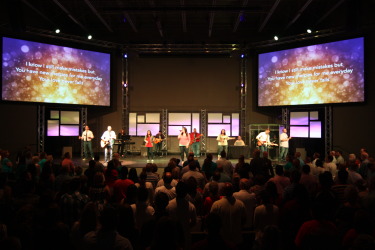 Advanced was brought into the project during the design phase and worked with BBA Architects in defining the rooms shape and acoustics. The ability to introduce proper acoustical surfaces and treatments from the projects beginning helped create a purposeful design to the room.

Technology has always been a big part of Brazos worship experience and Corey Gring Technical Arts Pastor was very active in the design process. Bob Sullivan from Advanced visited a typical Sunday service to identify current technical needs and skills and to develop a blueprint for technology moving into the new space. Shortly after the visit drawings and specifications were created and the building process began.

As the construction process neared completion Advanced had pre assembled necessary elements in their warehouse in order to make the install go smoothly. Items were shipped down and a crew from Advanced was on site for 1 week to complete the install. The schedule was very aggressive but needed to fit into the projects overall building schedule. Bob Sheridan project foreman managed things on site assuring they would all make their flights out at the end of the week.

The project consisted of a large amount of Truss that was used as a design element as well as support for some of the technology infrastructure. The video system consisted of three large display screens one of which was a center motorized screen that could be used as needed. The heart of the video system is a BMD 2 ME video switcher. New JVC GY-HM600 cameras make up the capture devices and the entire system is running in HD.

The Audio system was designed to provide high energy and volume to accommodate the contemporary worship style. JBL VRX speakers made up the main clusters and Danley TH215 Subwoofers covered the low end. Power was provided by Crown XTI6002 amplifiers. An Allen & Heath GLD80 was chosen for its digital snake and personal monitor system integration as well as it’s ease of use.

Lighting has always been a key part of the worship service and a variety of new lighting was installed for the room. Dimming and conventional fixtures by ETC created the base and moving lights by both Elation and American DJ were added for effect. All the lighting falls under the control of an LSC Clarity controller. 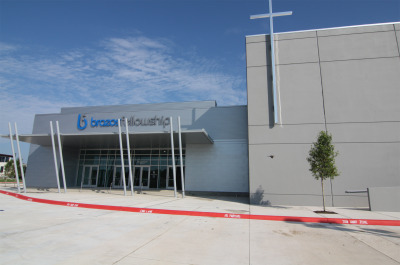 The church has seen continued growth since they have moved in with a 40% increase over the previous years attendance once college classes resumed. They are looking forward to programming special events in the room and reaching out to the community in new ways.