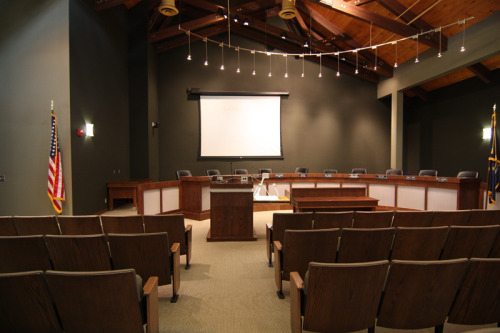 The Task:  Provide an updated City Council capture, record and play out solution for a local municipality looking to increase efficiency and quality.

The city of Auburn Hills is a northern suburb of Detroit that is home to many major corporations and performance venues.  Recently it needed to update the production capability in the City Council chambers.  The original production system had become outdated and relied heavily on a custom PC control interface that was no longer supported.  The staff in this small community wears many hats and finding a solution that streamlined the process was a priority.  Will Cagle from the city contacted Shawn Watts from Advanced looking for assistance in the process.

The heart of the system was based around the Tricaster 855.  This version of the Newtek product line brought a complete HD production suite into the solution at a very affordable price.  With up to 8 HD/SDI inputs available it more than accommodated the needs of the city.  The Tricaster has built in graphics capability as well as the ability to stream content live or record for playback at a later time.  The Tricaster also ships with a complete control surface that puts all the functions at your finger tips.  Another winning feature is the built in Multi-viewers that allow for a pair of 37” LCD TV’s to be used for monitor and to display the user interface.

Along with the Tricaster the cameras in the room were upgraded to Sony EVI-H100S compact PTZ units.  With the Sony RM-BR300 remote this provided a quality input solution with a simple user interface that allowed for preset positions.  Other input sources included a variety of computer input locations at the front of the room.  The signals were routed to an Analog Way Octo Vue scaller switcher.  To simplify control a Kramer RC6iR remote was installed and programmed that put the operation of the unit at arm’s reach.  An additional RC6ir was installed to simplify control over the existing Sanyo projector used during presentations and meetings.

As part of the solution a network based playback system was desired.  Originally meetings were recorded to DVD and then ingested into a PC for editing and titling.  This added days to the process while taking up much needed resources.  As part of the solution a Keywest Technology MediaXtreme Broadcast unit was installed.  This network player allows for the completed program from the Tricaster to uploaded from the network storage location and be played back at specific times.  The process has been streamlined so much allowing for on air turnaround times of minuets instead of days.

For more information on how a solution like this can benefit you please contact Shawn Watts at Advanced Lighting & Sound.