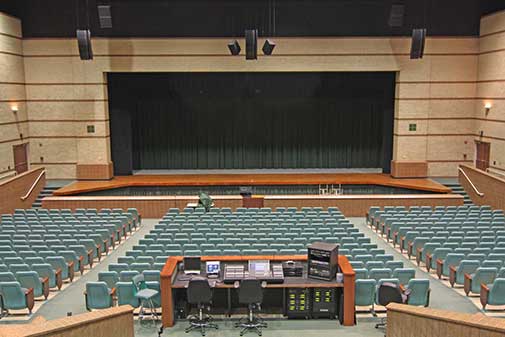 The Task:  After many years of inadequate sound The Chippewa Valley School District contracted Barton Malow Technologies division to design and oversee the installation of a new Audio/Video system for one of their High School Auditoriums.

The Solution:  A System was designed in cooperation with JBL that utilized the VRX speaker system.  After extensive EASE modeling bid documents were prepared and Advanced Lighting & Sound was awarded the bid.  Advanced worked with Barton Malow in fine tuning placement after some changes were made to the rooms acoustic reflectors.

To simplify the installation a Yamaha M7CL digital console was chosen along with the Yamaha digital snake system.  This took the design in the direction of a Ethersound digital backbone.  Yamaha DME Satellite processors were chosen for their seamless integration into the Ethersound environment.  A variety of new Shure wireless were added to the existing schools units for a total of 20 available channels.

The original specification called for 10 channels of wireless intercom to interface with the schools existing Telex system.  After frequency analysis a concern for available frequencies was raised and to solve this the new Clearcom Tempest solution was chosen running in the 2.4 GHz  range.

The speaker system was designed around the JBL VRX932 system.  A left, center and right  cluster were installed along with four flown VRX subwoofers.  Additional down fills were provided with JBL AM4215 speakers.