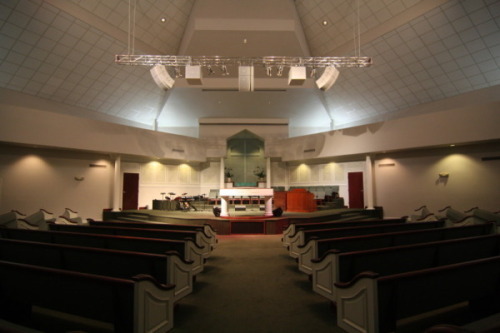 First Church of Sterling Heights recently underwent a system upgrade.  As the need for improved sound and production flexibility have evolved Advanced Lighting & Sound was called in to help design a new solution that would meet these needs now and into the future.

Over the years the needs of the church have grown and the system installed over 15 years ago was not capable of meeting the desired performance goals.  Bob Minchella of Advanced had been working with Shawn and Karen of the sound team and Pastor Hoffman for a few months trying to dial in all the changes that were needed.

At the center of the upgrade was a new sound console.  The old analog Mackie 8 bus recording console had served its purpose.  The new console had to provide expanded processing capability as well as snapshot recall, Aviom integration and a clean user interface that would be friendly to volunteer operators.  After careful investigating it was determined that a Yamaha CL5 console would be the best fit.  Another benefit of the solution was the easy integration to add a recording split in the future.  A 48 channel system was installed along with new Aviom 360 personal mixers for the performers on stage.  New JBL STX monitors were added for the choir along with new Audix microphones. The presence of the Choir was heard as never before.

With all of the front end equipment covered the next step was to find a proper speaker solution for the room.  Years earlier the Advanced design team had created an EASE Acoustical model of the church.  The model was pulled up and configuration options began based on newer speaker products on the market.  After some work it was decided a mono system based around the JBL VRX932 speaker system was the best option.  The modeling called for three clusters of three that seemed a little excessive but after installation and tuning it was verified to be right on.  The pattern control from the front edge to the rear was very impressive along with the consistent SPL readings.

As part of the installation new trussing was needed to accommodate the increased equipment load and new mounting locations to the structure were required.  The Install team went the extra mile pulling the installation off in the allotted time and getting everything ready for a Saturday rehearsal.