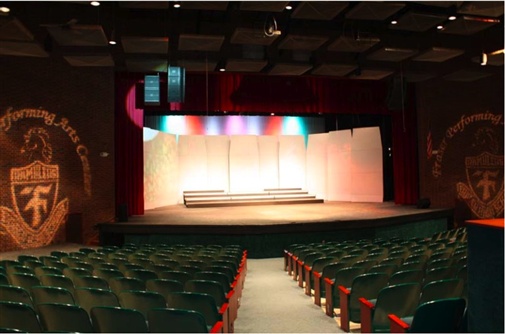 The Task:  Provide a new sound system for the performing arts center as designed by Barton Malow.

The Solution:  The system was designed by Dean Harris of Barton Malow’s design services.  The design intent was to provide a sound system capable of providing reinforcement for everyday functions all the way up to larger concert events performed by professional touring companies.

At the hart of the system is a JBL VRX line array cluster.  The cluster was chosen for its ability to carry the main room and the extended seating areas at the back that double as classrooms space.  The original specification required the winning bidder to provide an acoustical model of the system proofing the design concept and refining speaker placement.  The speakers were powered with Crown I-tech amplifiers and a Biamp NEXIA SP processor was used for all the system processing.

Other main components in the system consisted of 20 channels of Sure ULX wireless to be used during the schools plays and musicals and a  Yamaha M7cl 48 channel digital mixer.  The mixer is located at the front of house providing all the mixing power. The Theater Manager was very pleased with the board and after initial training provide by Advanced’s Bob Minchella he was navigating it like a pro

Another major portion of the upgrade was the addition of a large central projection screen and a 6000 lumen Eiki projector.  The video is controlled by an Extron System 7 allowing video upscalling and seamless switching between sources.  The school has used the system successfully for community meetings and a new Movie Night event put on for the students.

Due to the systems success Barton Malow is hoping to show some of their other school clients the benefit of an updated performing arts system. Close up view of JBL VRX 932 cluster.  Two are used in the room one left and one right. Yamaha M7cl 48 channel mixer at new mix position.