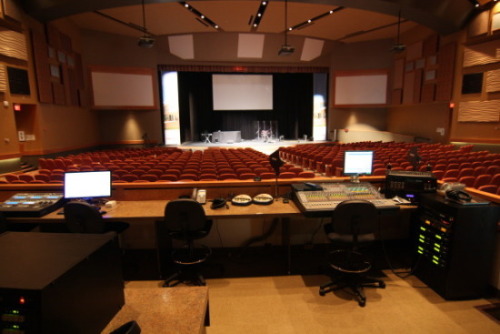 The Task:  Assist in the design and construction of a new worship facility from the ground up.  The current facility was annexed by the government for a new road project and the church was blessed with an opportunity to build a facility from scratch that would meet their needs now and into the future.

Advanced Lighting & Sound was brought on very early in the planning and design phase after the Church and the Architect had toured some previously completed projects.  The process was vey hands on allowing for great collaboration with the Church and the design team.  Bob Sullivan from Advanced was tasked for the design duties which included, Acoustical design  issues, Audio reinforcement systems for multiple rooms, Lighting design systems for multiple rooms and a variety of Video solutions including a complete IMAG solution for the main worship space.

A separate Youth Area was designed and some of the Churches original equipment was reused for this space.  A new shared lighting system based on an ETC dimmer rack with network nodes allowed for multiple rooms to share the common dimmer.  A Vista lighting console was added to create a training ground for operators moving into the main worship space.  Moving lights and LED fixtures by Elation added a wow factor to the room.  A custom three screen display was created over the stage allowing for triple wide video elements to be used for effect and to enhance the Worship experience.

The Chapel space was designed to be intimate yet needed to provide technology for a variety of purposes including teachings, wedding and music rehearsals to name a few.  A Yamaha LS9 audio console was installed in a custom HSA rack at the front of house location.  This provides for easy recall of various configurations used in the room.  Sanyo projectors were installed with motorized screens flanking the stage.  The screens can disappear for weddings and other events that do not require the technology.  The speaker system consists of a pair of Nexo PS15 speakers that were chosen for their unique asymmetrical horn that fit the room’s geometry well.

The Main Worship space systems were designed to be volunteer friendly as well as technically advanced to meet the planned worship style and special events the room would be used for.  The speaker system chosen was the JBL Vertec 4886 compact line array.  Clusters left and right covered the room with tremendous accuracy and clarity.  Crown I-tech amps were used for power based on the tight integration of the two products.  Cardioid arrays of Vertec 4883 subwoofers are located left and right at the proscenium opening.  The mixing duties were accomplished with the Avid Venue SC48 platform.  This was chosen for its sound quality as well as the tight integration with Pro Tools. It was decided the Virtual Sound Check feature would be of great use in training operators on the system.

The lighting system in the Main room consisted of more ETC dimming.  A variety of Elation moving heads and LED lights were used to augment a traditional light plot that utilized a variety of ETC Source 4 Ellipsoidal’s, Par’s and Parnel’s.  Lighting control for the entire system fell to the Jands Vista S1 system with 1024 control channels.  DMX distribution by Pathway Connect tied everything together.

The video system started out as a two screens left and right of the stage with Sanyo 15k projectors.  The original intent was to provide graphic and lyric support for worship.  Midway through the project the idea of IMAG was brought back up and with some adjustments to the budget and equipment in other areas a full blown video production system was added.  With the use of the For-a HVS-350HS switcher as the core a hybrid multi ME solution was configured.  The For-a is a 1.5 ME switch but for this application 3 discrete mix busses were needed, one for a record feed, one for the left and right IMAG feed and one for a centre screen feed.  One of the unique features of the For-a switcher is the ability to do a fixed fade effect on the Aux busses.  After layout and design conversations it was determined that the base system with remote aux panels would meet the needs.  This solution came in at a budget level far lower than anything else on the market.  As part of the video system a Mac computer equipped with Renewed Visions Pro Presenter was installed along with a Matrox triple Head to Go and Matrox DVI Convert Plus units for signal conversion.  JVC GYHD-790L17 cameras were tasked for the IMAG capture.  In order to better fit the budget a traditional Studio sled and CCU were not chosen but all the same control was provided by using the JVC-RM-LP55 remotes along with remote switching power supplies.  Boxes from ESI provided the proper interfacing as well as a tally connection.

Room acoustics were a big concern for the Church going in and Advanced worked with the Architect and Interior Designer to find functional and appealing solutions.  The walls were treated with a variety of reflective and absorptive panels placed in a pattern that was effective and visually appealing.  The real proof was when the Windsor Symphony Orchestra performed in the room and declared “it was one of the best sounding rooms they ever played in.”

The project was a great success even with the many logistical challenges.  It shows what can be accomplished through early collaboration and the assembly of a design team consisting of individuals with open minds and one goal, “To build the best possible project for the client.”