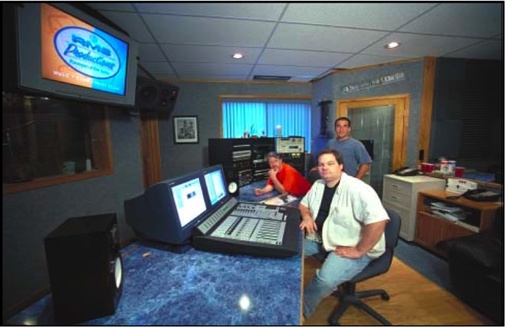 The Task: To access the current work environment and provide a solution that provides user continuity from room to room and shared access for users throughout the facility.

Randy Stephenson, Co-owner of RMS contacted Craig Frankenstein, systems integrator, at Advanced Lighting & Sound. He told Craig of his needs.  Craig was able to accommodate Stephenson’s wishes. The three studios are outfitted with Pro Tools 5.1.1 Mix 3 systems  which operate on a Rorke Fibre Channel SAN that ties the rooms together and makes it possible for Stephenson, Bob Stewart, co-owner, and Porter, their engineer to access each other’s sessions. The studios have Digidesign ProControl surfaces, Neve, Manley and Focusrite preamps,  extensive outboard gear and numerous plug-ins. A CDQ Prima ISDN converter links RMS Productions to other studios nationwide. The link enables voiceover talents around the country to continue to do voiceovers at RMS.

RMS is constantly growing and they are writing more original music scores and getting into new
projects. The company is about to go on the air with a series of two-minute radio programs, “Thoughts From The Front Porch,” based on Mark Dutil’s weekly column in The  Detroit News.   Who would have thought that playing piano and drums together in Randy’s basement in Southfield 20 years ago would lead to  such a rewarding business today!

History: Randy Stephenson and Bob Stewart have been together since 1988. Recording Stewart’s songs , doing voice overs, jingles, and original scores. What started out in Randy’s basement more than 20 years using a Radio Shack cassette deck, has grown into a sophisticated  music, sound design and audio post facility in Birmingham, Michigan. Their credits  include a Greektown Casino spot, a Marathon Oil commercial, original score for the thriller Dark Heaven, live artists like Bob Seger, and Rivers Cuomo of the hot alternative band Weezer and more.