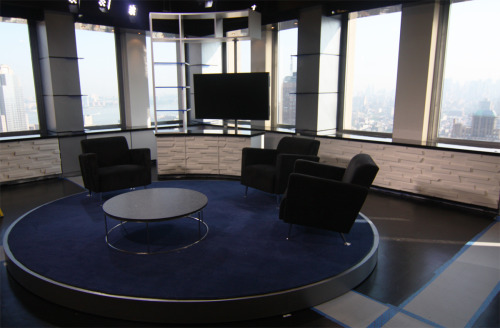 Advanced Lighting & Sound recently partnered with HA Design Group of Springfield Virginia. HA Design has over the years provided studio design and installation work for the Voice of America Studios. Recently an opportunity came up for them to renovate the existing studio space in New York City as well as construct a new studio space with a view of the city.

Advanced and HA Design had worked on a previous project and Steve Lewis of HA Design thought Advanced would be a perfect partner to address the studio lighting systems for both spaces.

The Skyline Studio was a new space that was designed and it had a set of new challenges. Power consumption and cooling issues were a concern from the beginning. Since this was a renovation on the 36th floor of the building many challenges existed. It was decided that the entire solution would be based around LED fixtures. Since the City Skyline is an integral part of the space it was necessary to come up with a lighting solution that could allow for color temperature correction based on the time of day and the weather outside. In order to accommodate this Advanced selected the TVL 3000 CW fixture from Elation for the primary light source. It comes with a variety of lens and has significant output. Additionally some ETC Source 4 LED Ellipsoidals and Elation Epars were added for color and special lighting needs.

Studio A was last renovated 10 years ago and was in need of a technology up fit. The lighting system was based around a hand full of Brightline Fluorescent fixtures and Lowell 350watt Fresnels. All the dimming was via 4 channel dimmer packs. As part of the upgrade a new set was designed and LED backlighting was going to be a major element of the set pieces. The goal was to use as much of the existing equipment as possible with some new fixtures added. Elation TVL 3000 CW fixtures were selected so they would match the fixtures in the other studio. Some Elation Epar fixtures were also added for spot color effects. A new light plot was designed and executed by Advanced that addressed the multiple sets with in the room.

As part of the design a new control solution was needed that could provide a simple control option capable of calling up a variety of presets and allow easy adjustments. Since the studios will typically operate with one engineer a solution that would allow control from the studio or the control room was needed. Bob Sullivan with Advanced decided to use the ETC Paradigm control system. While not a traditional solution it provided the opportunity for a very user friendly interface designed on portable touch screen controllers. Simple 10 button panels are also part of the system allowing for quick preset recall of defined looks. The touchscreen option provides for security between operators and the integration of LED fixtures is very easy with a color picker option.

After completion the system feedback has been very positive. A variety of users have been able to easily accommodate the varied productions in the studios. New presets are easily created and the ability to globally change the color of set elements could not be easier.