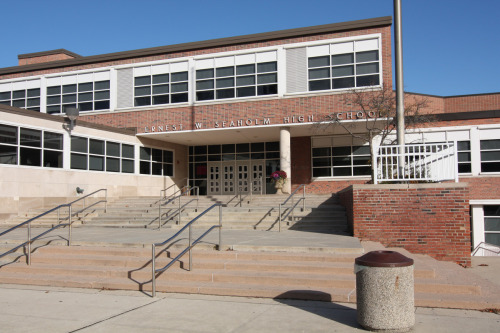 Advanced Lighting & Sound recently completed a district wide upgrade to Birmingham Public Schools building paging systems.  The process included all 15 schools as well as the Board office.  The districts goal was to improve sound quality, ease of service and the ability for a unified message delivery system in times of emergencies.

The system was designed by Dean Harris of IDS in Troy Michigan.  Advanced was awarded the project that had a very tight time line for completion.  All work had to be accomplished over the summer break and had to be coordinate with summer school, camps and regular building maintenance schedules.  The team at Advanced jumped into the project at full speed to make this happen.  The install had many challenges based on the fact that many of the building systems had little or no documentation for what was previously installed.  One of the project goals was to be able to provide a system the district staff could trouble shoot and service which up until now was not possible.

Advanced devised a testing and documentation plan that provided the information necessary for a proper install and created the proper paperwork that would be used for servicing the system in the future.  The entire system was based on Biamp Systems Vocia paging product.  The Vocia system uses the districts LAN and WAN infrastructure to interface all the devices for remote administration.  It also allows for district wide paging capabilities when needed.  All existing speakers in the schools were used with additional speakers added for areas that were lacking coverage.  Because of the extensive testing up front all problems in the buildings were identified and repaired as part of the process.

The project was completed on time and on budget.  The overall improvement in sound quality was amazing.  Systems that were hard to hear before were clear and strong.  Upon completion of testing each building system was set up to email notifications on the health of the system helping identify problems before they arise and adding peace of mind to the district staff.

“Our confidence in Vocia was confirmed the first week of school when people could really hear the difference in the bells and announcements. We’re very happy with our investment in Biamp and Vocia.” –Dr. Joseph Hoffman, Executive Director of Technology for Birmingham Public Schools.