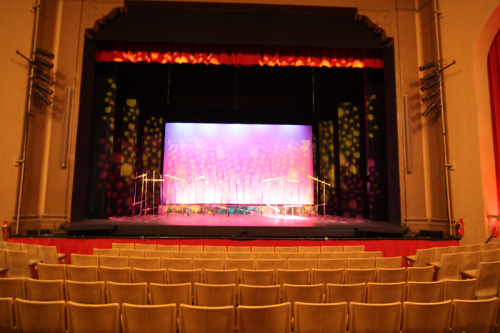 Solution:  Wayne State University in Detroit Michigan has always been known for its Performing and Technical Theatre programs.  Over the years the systems in the Bonstelle Theatre have never received all the attention they deserved.  Thanks to Patrick Field WSU Theatre Manager and the Universities Tom Schraeder Professor of Theatre and head of the Lighting Design MFA program a plan was assembled to help upgrade the systems.

Greg Koss from Advanced work with Patrick in identifying what would make the greatest impact in the room.  The original audio system consisted of an old 32 channel analog console, a mismatch of speakers including original Altec Lansing Voice of the Theatre boxes and amplifiers dating back to the 60’s. Recently the University had added over 20 channels of Sennhesier wireless mics as well as a sound effects playback system.  What was missing was an overall plan on how to best integrate what they had and what was needed into a modern theatre audio system.

The first step was to focus on a mixer solution.  It was determined that a digital board would best meet the needs but due to limited building infrastructure cabling of any new inputs or outputs was going to be challenging.  With the advent of the Modern Musical

instrument amplification and higher SPL levels are part of any leading program.  In order to accommodate the flexibility required a digital snake solution would be needed as part of the solution.  Also since the room can produce anything from a straight play using wireless mics and up to 8  tracks of sound effects to a full blown musical with instrumentation and numerous wireless mics the solution needed to be flexible.  Advanced suggested a Yamaha M7CL-48 console along with a pair of SB168 snake boxes.  Additionally an Aviom card and mixers were added to help meet the needs of the performing musicians.  The benefit of all of this was the connectivity for everything now rested on a pair of CAT5 cables.  By using a standard M7 at the mix position all 48 of the mic preamps were maintained allowing for the system to select from over 80 input channels.

The bigger challenge was to find a speaker solution that would accommodate the rooms needs and also not distract from the stage area or the flexibility the room has to accommodate the varied productions.  Bob Sullivan with Advanced took up the design challenge and looked to Renkus-Heinz and the Iconyx steerable line array solution.  With the ability to create multiple beams and control the energy from the speakers it was a natural fit to cover both the main floor and the balcony.  A pair of IC24-R units were used to provide the proper coverage needed.   At first the University was sceptical but after presenting the modelling data and showing them the control interface they were fully on board.  For low frequency augmentation a pair of Renkus-Heinz PN-212SUB speakers were added.  With the built in amplification and the compact size the units can easily be moved to adjust to a productions needs.

After initial commissioning, the staff was amazed and the reach and clarity the speakers had from under the balcony all the way to the last row in the upper balcony. What the performers noticed was the lack of reflected energy coming back to them on stage from the balcony face.  The installation was a huge success and a step forward in providing the facility with the tools needed to educate and produce top rated theatrical productions.