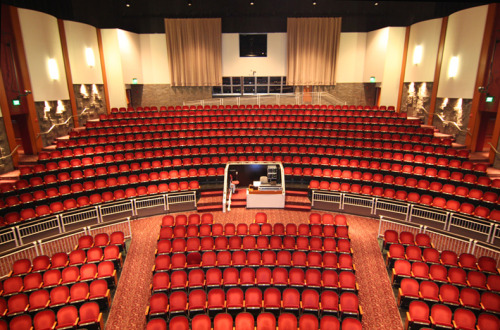 The Task:  Update an older audio system that was primarily designed for speech to accommodate a growing Performing Arts Centers event programming.

East China Performing Arts Center is a jewel in a rural school district north of Detroit.  The facility was built to support the artistic needs of the school district and as a resource to the community to enrich culture by providing a performance venue accessible to all.

Greg Koss from Advanced worked with Dave Simpson the Theatre Manager together they identified the existing deficiencies in the system and helped map out a direction that would meet the facilities needs.  The first step was to take the project to Advanced’s design team who created an acoustical model with EASE modelling software to investigate some scenarios.  The room was originally designed with many acoustical details so the only challenge was to identify a solution that would provide the proper coverage and levels for the intended use.

It was determined a centre cluster system would best meet this need.  Based on access for installation and the rooms aesthetics a wide coverage line array was determined to work best.  Renkus Heinz CFX101-LA8 speakers were chosen as the main array element.  Five boxes were used to get the proper coverage from the front to back of the room.  A pair of CFX15s subs were hung left and right of the array for added low frequency support.  The cluster was augmented with JBL AM5212/64 down fills to cover the down front side areas that fell outside the coverage pattern of the lower array elements.  Placing the subwoofers in the air maintained the flexibility and look of the stage Proscenium.

For budget purposes it was decided to re-use as much of the current equipment as possible.  Processing by Ashly already in place was more than adequate for the project.  A mix of existing and new QSC amplifiers completed the installation.