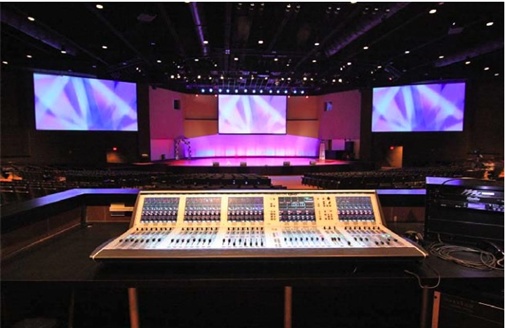 The Solution:  Advanced Lighting & Sound began the process by generating a room model in Ease to help determine the best possible solution.  After detailed analysis a solution based around the Renkus Heinz ST9 Reference Point Array speakers was selected.  A LCR configuration was chosen for the room as well as a delay ring for the rear of the room.  The entire system is powered by Crown CTS series amplifiers with USP3-CN cards.  BSS processing was used for overall system control and with by using the new Blue 800 series we were able to maintain Cobranet routing throughout the signal chain.

Early on we had the opportunity to demonstrate the Soundcraft Vi6 consoles to the church and they were very pleased with the quality and ease of operation.  Two consoles were integrated into the system providing  FOH and Monitor desks all tied to a single stage box with a fiber audio interconnect.

A multiple screen display system was planned that included HD capability for IMAG and content playback as well as the integration visual elements.  The first Barco FSN switcher in the country was installed and JVC GY-HD250 cameras were chosen for the IMAG support.  Multiple computer inputs were easily integrated into the Barco supplying text and graphics.  Three Sanyo 15,000 lumen projectors were chosen to present the imaging and plans to add a fourth as additional output for the center image are in the works.

The lighting system consists of 192 channels of ETC Sensor dimming and a full assortment of ETC light fixtures.  An ETC ION control console with fader wings was added for control. Additionally LED fixtures were added as a wall wash for added impact.